Dear donald: Can We Make You Stop Writing Again!?! 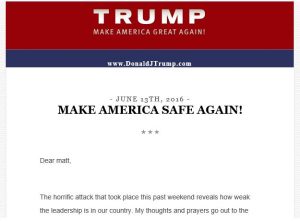 On behalf of the National Junior High Contest on How to Respond to the Orlando Tragedy, I want to confirm receipt of your essay, headlined “MAKE AMERICA SAFE AGAIN!” and which you included in an email from your campaign for U.S. President this afternoon.

I have re-printed your essay here:

The horrific attack that took place this past weekend reveals how weak the leadership is in our country. My thoughts and prayers go out to the many friends and families affected by the events in Orlando, Florida. I am going to be a President for all Americans, and I am going to protect and defend all Americans. We will not stand by and allow another tragedy like this to happen. We are going to make America safe again and great again for everyone.”

First, Mr. Trump, I must take you to task for again failing to capitalize my name. To give you a dose of that medicine, I have already kept your name in lowercase (above) and in subsequent references to your donald-ness in this letter.

How does that make you feel? A little less important? Somewhat overlooked?

On that basis alone—your inability or unwillingness to properly punctuate something so basic and so personal as someone’s name—I was tempted to stop reading the filth that seeped into my email in-box. You may recall how you gained access to my email: it came after I registered for the Trump Rally That Wasn’t at the UIC Pavilion in March.

In every email since then, you have addressed me as “matt.” I have thought about unsubscribing to your vitriol masquerading as a political campaign, but then you wouldn’t have been able to compete in the National Junior High Contest on How to Respond to the Orlando Tragedy! (I figured you’d appreciate that exclamation point…it had been too long!)

Turning our attention to that essay, I have to acknowledge, donald: your botched salutation aside, you begin your first sentence with so much promise: The.

Well done! You capitalized the often-underestimated article…I’m so proud of you! Let’s Make the Capital Words Capital Again!

Alas, you go downhill from there: “…horrific attack that took place this past weekend reveals how weak the leadership is in our country.”

I don’t know where to begin, and I could go on for a very long time—people tell me that they really love my long sentences. I’m an amazing writer, and have a hot wife who loves my literary flair. (I know how much you love your hot wife—at least we’ve got that in common, donald.)

Oh, getting back to your sentence…well, it’s just plain ugly. Sure, an argument can be made that our national leadership isn’t at the apex of our nearly 240-year history. But, come on, if you want to make that kind of assertion, it’s about 894th on the list of relevant claims in the first point of a missive that comes in the wake of such a brutal massacre, donald.

High on my list of suggested endings to that sentence: “….reveals how broken our national gun-loving system is that it allows such rapid-fire weapons of destruction into a citizen’s hands.”

But, no, you again whip out your broad brush of Sweeping Condemnations Without Cogent Recommendations and cynically use this tragedy to try to score political points.

The rest of your diatribe is also a disaster, donald. It’s a complete, total disaster. (I’m jabbing my finger at you, in case you were wondering.)

You offer your “thoughts and prayers” and as if that isn’t enough to make a fair-minded American gag, you go on to make a promise that is beyond your control: “We will not stand by and allow another tragedy like this to happen.”

Do you think you’re talking to preschoolers, donald? Such a pledge is irresponsible and arrogant, for starters. Then, of course, you wield the phrases “great again” and “safe again” in an apparent attempt to anticipate Google search terms—or because you like using “again” again and again. And again?

donald, I am absolutely elated to inform you that your essay “MAKE AMERICA SAFE AGAIN!” finished dead-last in the National Junior High Contest on How to Respond to the Orlando Tragedy.

On a personal note, happy 7th birthday. Or is it your 70th?

Related Posts:
7 Take-Aways from the Trump Rally in Chicago
Fallout is Coming for the Shoddy Leaders in the Laquan McDonald Murder Cover-Up