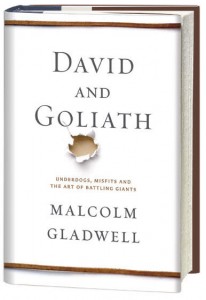 It’s a phrase that is steeped in our collective consciousness: David vs. Goliath. Dating back to the original confrontation between David, the shepherd boy, and Goliath, the fearsome Philistine, the two opposing forces represent the underdog going up against the giant—and somehow, some way, finding a way to win.

In his latest book, David and Goliath: Underdogs, Misfits and the Art of Battling Giants, author Malcolm Gladwell shines a new light on that 3,000-year-old clash. Building on a mix of astute observation and debatable speculation about the original David versus Goliath encounter, Gladwell goes on to hammer home one central point.

For example, someone with dyslexia compensates by becoming especially skilled in listening and memorizing content—meet renowned attorney David Boies. And another dyslexic parlays that handicap into being an expert negotiator—meet Hollywood producer Brian Grazer.

That theme, of turning a liability into an asset, is a message with resonance among many motivational leaders. In so many words, by being persistent and developing yourself over time, “your biggest weakness will become your biggest strength.”

So how does that truth apply in public relations and marketing?

On some levels, there’s a real uphill battle that the solo practitioner or smaller agency faces in competing with the bandwidth of national PR giants like Edelman, Weber Shandwick, FleishmanHillard and Ketchum.

On the other hand, when it comes to representing businesses on a more local level, there is a nimbleness and expertise that the so-called “underdog” brings to the equation and actually holds the edge over the behemoth “big name” agency. However, because a client is smaller or located right down the block from your solo or small practice does not guarantee you hold the edge in being their go-to public relations provider.

What follows are some consistent habits that you should develop to ensure that you are the one still standing when the dust settles from any Main Street PR Prospect’s David vs. Goliath consideration:

*Develop a reputation as an expert resource on PR and marketing endeavors. Speak to local civic groups, be a presenter at area workshops, volunteer on occasion to write news releases for business associations.

*Schedule workshops on a regular basis. These might be for free, or for a modest fee. Even when not many people attend, the media coverage and social media buzz that you generate around the events serve as a subtle commercial for your services.

*Be engaged with local organizations and businesses via social media, such as Twitter and Facebook. By offering your “likes” and the occasional insight, you are boosting their efforts at heightened awareness and thereby raising your own profile in a winsome manner.

*Consider being a sponsor of community-based events or organizations, such as a little league baseball team, so that your brand gets repeated exposure in your own backyard.

With anything that you pursue, bring realistic, patient expectations to the process. Your results won’t be overnight, but as long as you offer quality services along the way, they will surely come over time.