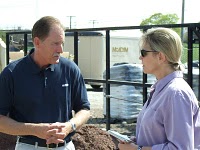 Among those interviewed for the segment were Scott McAdam, the company president, and employees Anthony Harris and Rosa Montes. Clearly, they are among a larger group of individuals, including some others interviewed on camera, that have played instrumental roles in this successful initiative.

Kudos to the entire team for its collective willingness to do “the right thing,” as Scott McAdam told Bange.