I have subscribed to Axios, the news website, since shortly after its 2016 inception. And after reading Smart Brevity, the new book by the organization’s creators, I am striving to subscribe more to its core point, captured in the book’s subtitle: “The Power of Saying More With Less.” 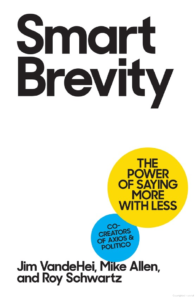 As I have told writer friends: “Great book. Read it.”

This past weekend, I put its pointers into more deliberate practice with this Patch.com story on the local high school boys’ soccer team.

The “smart brevity” influence is seemingly spreading, too: three days later, the local newspaper posted a story that echoed my own coverage of the Oak Park and River Forest boys’ soccer team.

In addition to mirroring the keys-to-success elements and the names of players featured in my article, the other reporter cited nearly every statistic that I employed, including the squad’s 40-4 scoring edge during its eight-game winning streak.

It was, I suppose, the highest form of flattery.

In the spirit of Axios, let’s leave it at that. (To dig further: see the other story.) Related Posts:
A Recent Reminder on the Power of Brevity–More or Less
Memo to Journalists: Don’t Let Opinion Ruin a Factual Story