My first baseball story of 2022 appeared a few weeks ago in the Daily Herald, on the occasion of Miguel Cabrera’s 3,000th career hit. But its genesis can be traced to 2017. That is when statistical curiosity—one of my incurable traits—prompted me to embark me on a research path that encompasses other baseball greats of the past century-plus. 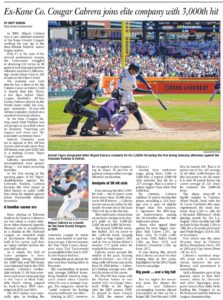 As many baseball fans know, baseball analytics, particularly for Major Leaguers, drill down just about any movement on the diamond: defensive range, the length of baserunners’ leads, a batter’s launch angle when connecting with the ball…on and on it goes, with new stats popping up seemingly as often as those career minor leaguers who finally get a call-up to The Show.

But it hasn’t always been this way.

For example, I can’t recall when I first encountered the term “OPS” (on-base percentage plus slugging percentage, a great distillation of someone’s ability to get on base as well as to produce runs.) However, it’s a pretty safe bet that it was at least a few decades after I memorized thousands of data miscellany on baseball cards that I collected in the late 1970s. Today, in terms of gauging someone’s offensive impact, OPS is about as vital as it gets.

Researchers have done much to go back in time and calculate those metrics that can be deduced from previously captured data. Not every stat, though, is so readily measured. That’s why in 2017 I set out to perform a unique analysis of all 30 men who were then part of the 3,000 Hit Club.

To set the scene: Ichiro Suzuki, the Japanese hit-making machine who played for the Seattle Mariners for most of his career, had just reached the threshold the previous year. Meanwhile, another legend was approaching the milestone: fearsome slugger Albert Pujols—a St. Louis Cardinal for over a decade who by that point had been playing for a half-dozen years with the Los Angeles Angels.

Both had produced eye-popping numbers for a big chunk of their careers, and both had experienced sharp declines that left them inching, ever so slowly, toward the 3,000-hit mark. My interest was piqued: it’s common to see players’ fortunes dip as they age, but how typical was the markedly reduced output of these two particular players?

For each player’s journey to 3,000 hits, I carved their career into four pieces. Thanks to Retrosheet.org and its play-by-play and box scores of nearly ever MLB game for the past 100-plus years, I was able to identify the precise at bat of virtually every player when he reached 1,000 hits, then his 2,000th hit, then his 3,000th hit. For good measure, I calculated how all these men fared after their 3,000th hit—with Roberto Clemente of the Pittsburgh Pirates, tragically, the only player not to have that opportunity.

Thereafter, Pujols wrested that dubious distinction from Ichiro—Pujols was batting a career .328 when he recorded hit #2,000. In his plodding march to 3,000, he went 1,000-for-3,765 (a .266 average, or 62 points lower than his mark at the 2K milestone). Along with the five other Latino members of the 3,000-hit club, I wrote about Pujols’ trajectory in La Vida Baseball four years ago. 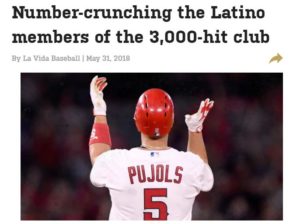 All of which brings us to Cabrera, who as a highly touted 18-year-old prospect played one season here in the Chicago suburbs as a member of the Kane County Cougars. The Single A team was part of the then-Florida Marlins’ farm system. That local angle was a prominent element of my Daily Herald story. But I also put Cabrera’s career within the context of his 32 fellow 3,000-Hit men.

You can read the entire piece online, headlined “Ex-Kane County Cougar Miguel Cabrera takes up and down path to 3,000 hits,” or by clicking on the image above in this post.