Voicing a fierce yearning for equity, justice and building bridges between those who are divided, Kevin Coval delivered a stirring presentation at the Oak Park Public Library on Wednesday evening.

He brought to life a sampling of the 77 pieces (one for each city neighborhood) in his 2017 book of poetry, “A People’s History of Chicago,” fielded questions from audience members, and provided insights about formative moments that have guided his development as a poet, spoken-word artist and community builder. 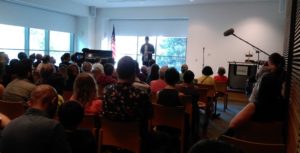 For those unfamiliar with Coval, he has had a far-reaching impact through his teaching in the classroom (among other stints, he is now a teacher of hip-hop aesthetics at the University of Illinois-Chicago) and beyond (he is the founder of Louder Than a Bomb: The Chicago Youth Poetry Festival). That influence is affirmed by Chance the Rapper in his foreword to the book, in which the star performer showers abundant credit on Coval for playing a key role in his development.

The Force of Conviction in `A People’s History’

Having read the book a few weeks ago, I was struck by the force of its conviction and the depth of its desire to lift up those who historically have been marginalized. “Regardless of who you are and regardless of where you come from,” Coval told the library audience, “we all have essential stories to tell.”

One of the book’s icing-on-the-cake bonuses—and my recent Google search history would bear this out: many of the poems provocatively pointed me to people, events and entire movements in Chicago’s history of which I had little or no knowledge. Coval ushered this reader, time and again, into nooks and crannies of Chicago’s history I had previously never come close to encountering.

The library presentation was part of a larger programming initiative that includes book discussions and a walking tour of Oak Park that dovetails with themes explored by Coval in “A People’s History of Chicago.”

The book is a most worthy addition to the library’s “One Book, One Oak Park” tradition of rallying the community to get on the same page with a book selection. Spurred on by the passionate force of Coval’s visit, which was wisely recorded on the library’s Facebook page, it may well become the most successful summer-time selection yet.

One truth I discovered Wednesday evening: my silent reading of the book on a few plane flights was a pale shadow of Coval’s oral delivery. His lyrical, emotive and often-spellbinding performance deservedly drew hearty applause from the 100-plus of us who packed the library’s Veterans Room.

For a taste, tune in to this reading of the book’s first poem, Shikaakwa, in which Coval examines the dubious history of how the city came to be called, and spelled, “Chicago.”